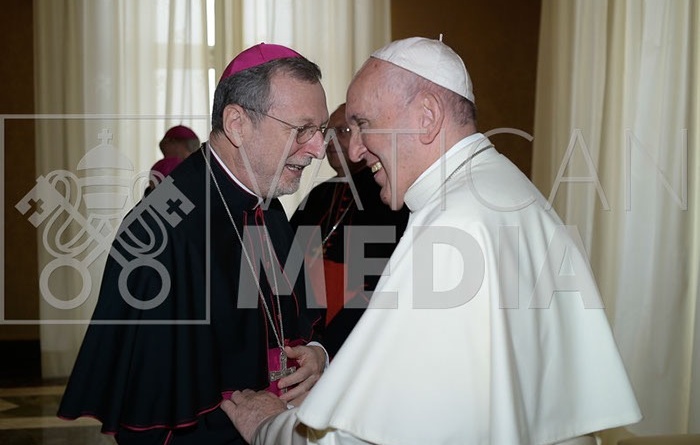 On the 10th and 11th of June, 2019, the Apostolic Nuncio, Archbishop Claudio Gugerotti, took part in the work of the ROACO, Meeting of the Works for the Help to the Oriental Churches, which periodically convenes under the auspices  of the Congregation for the Oriental Churches. ROACO actually comprises many Catholic organisations that financially support the Churches of the Christian Orient in the world.

On June 10th, 2019 the Holy Father Francis received in audience and addressed those present at the meeting  (you will find the text of the discourse of the Holy Father at the end of this message). Pope Francis then met with each one of the participants, and in a special way talked with the Nuncio about the preparation of the meeting which will take place in the Vatican on the 5th and 6th of July 2019 of the Pope and his collaborators, with the Major Archbishop, the Permanent Synod and the Metropolitans of the Ukrainian Greek-Catholic Church.

On June 11th, 2019, the Nuncio was asked to address the members of ROACO on the political, social and religious situation in Ukraine, and offer useful elements for the allocation of the – already substantial – next financial aids provided by these organisations, in order to help the development of Ukraine in its various aspects.

I am pleased to receive you at the beginning of the work of the ninety-second plenary session of ROACO. I greet Cardinal Leonardo Sandri, with gratitude for his kind words of introduction, and I thank him and the entire staff of the Dicastery, as well as you and the agencies you represent. You have assembled, from places throughout the world, because of your concern for the present and the future of the Oriental Catholic Churches.

Since our last meeting, I too have had several opportunities to encounter situations connected with the work of the Congregation and that of each one of you. I think of my recent Apostolic Journeys to Bulgaria, North Macedonia and Romania, but especially of the great day of prayer and dialogue with my brothers, the Patriarchs of the Middle East, which took place last 7 July in Bari.

In these days, the reports of the Papal Representatives from several countries and select speakers will help you attend to the plea of all those who in these years have been robbed of hope. I think once more with sorrow of the dramatic situation in Syria and the dark clouds that seem to be gathering above it in some yet unstable areas, where the risk of an even greater humanitarian crisis remains high. Those lacking food, medical care and schooling, together with orphans, the injured and widows, cry out to heaven. The heart of man may be unfeeling, but not God’s heart, grieved by the hatred and violence that break out among his children. His heart can always be touched; it will care for them with the tender love and strength of a father who protects and guides them. But I think sometimes of God’s anger that will blaze out against the leaders of countries who speak of peace and sell arms to make wars. This hypocrisy is a sin.

I think constantly of Iraq – where I want to go next year – in the hope that it can face the future through the peaceful and shared pursuit of the common good on the part of all elements of society, including the religious, and not fall back into hostilities sparked by the simmering conflicts of the regional powers. Nor do I forget Ukraine, in the hope that its people can know peace; I have tried to soothe their pain with a charitable initiative to which many individuals and ecclesial groups have contributed. In the Holy Land, I trust that the recently announced second phase of study for the restoration of the Holy Sepulcher, in which the Christian communities of the status quo are working side-by-side, will meet with whole-hearted cooperation from all local and international actors. And this for the sake of a peaceful and respectful coexistence for those living in the Holy Land, as a sign for all of the Lord’s blessing.

We hear the plea of persons in flight, crowded on boats in search of hope, not knowing which ports will welcome them, in a Europe that does open its ports to ships that will load sophisticated and costly weapons capable of producing forms of destruction that do not spare even children. This is the hypocrisy I spoke of. Here we can recognize the cry of Abel rising up to God, as we noted a year ago in Bari, as we joined in prayer for our fellow Christians of the Middle East.

In these days, together with voices of sorrow and lamentation, you will also hear voices of hope and consolation. They are the echoes of that tireless charitable outreach that has been made possible also thanks to each of you and the agencies that you represent. Such outreach manifests the face of the Church and helps give her life, especially by nourishing hope for the coming generations. Young people have a right to be able to hear the attractive and demanding word of Christ. As we often heard during last October’s Assembly of the Synod of Bishops, when the young encounter an authentic and credible witness, they are not afraid to follow that person and begin to think about their own calling. I ask you to continue and intensify your efforts, in the countries and situations that you support, to help young people to grow in humanity, freed of forms of ideological colonization and with open hearts and minds. Help them to value their national and ecclesial roots, and to desire a future of peace and prosperity that leaves no one behind and discriminates against no one. This year, the young people of Ethiopia and Eritrea – following the greatly desired peace between the two countries – abandoned their weapons and now know the truth of the words of the Psalmist: “You have turned my mourning into dancing” (Ps 30:12). I am certain that young people hear clearly the appeal to sincere and respectful fraternity we made in the Document signed at Abu Dhabi with the Grand Imam of Al-Ahzar. Help me to make that Document known and to spread the good covenant for the future of humanity that it contains. And let us all be committed to preserving those realities that have been practicing its message for many years now. We think in particular of the educational and training institutions, schools and universities, so valuable especially in Lebanon and throughout the Middle East, authentic workshops of coexistence and training-grounds of humanity accessible to all.

I thank you for all that you do, and I pray for you. And I ask you, please, to continue to pray for me.Thank you.