His Excellency the Most Reverend Visvaldas KULBOKAS
Titular Archbishop of Martana 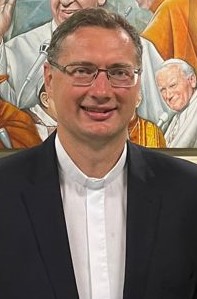 He was ordained priest on 19 July 1998, and incardinated in the Diocese of Telšiai, Lithuania.

He studied at the Pontifical University of the Holy Cross in Rome, where he obtained the Doctor’s degree in Theology (2002) and the Licentiate in Canon Law (2004).

On 15 June 2021 he was appointed Apostolic Nuncio to Ukraine.