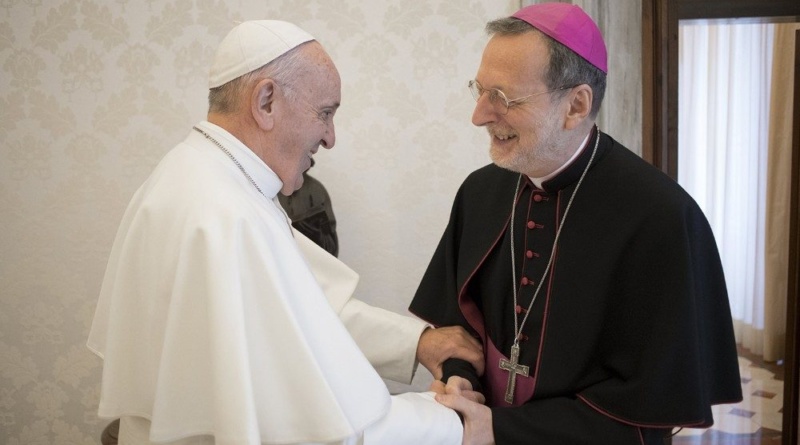 On Friday, 24th May 2019 the Holy Father has granted an audience to His Excellency Claudio Gugerotti, Titular Archbishop of Ravello, Apostolic Nuncio in Ukraine.

During the Papal Audience the Holy Father wished to be informed in details about the current political situation in the Country. The Pope asked His Representative to reiterate to the new President His cordial wishes which He had already expressed to him, that Ukraine, thanks also to the President’s explicit willingness of a constructive dialogue with all sides – a dialogue which the Holy Father hopes will be thoroughly shared by all – may experience finally a lasting peace, and a concrete action that may assure economic and social progress for the Country.

Furthermore, the Holy Father – given His constant interest in the matter – asked to be informed on the relations among the various denominations of the Orthodox in the Country.

The Holy Father has also conveyed to Archbishop Gugerotti His intention to give soon, according to modalities that will be specified in the near future, another humanitarian gesture in favour of children who have been in some way affected by the war.

It was discussed further the preparation of the important meeting of the 5th and 6th of July, 2019, between the Holy Father, part of the Hierarchy of the Ukrainian Greek-Catholic Church and the highest authorities of the Holy See who have competence in this sector.

In conclusion, the Nuncio gave to the Holy Father the golden medal of the Opera and Ballet Theatre of Kyiv, which has been conferred upon Pope Francis by the First Vice-Minister for Culture, Mrs. Svitlana Fomenko, for the humanitarian action “Pope for Ukraine” in favour of the victims of the war, during the Gala Europa which had taken place in that Theatre on Saturday 18th May 2019.  The Pope expressed words of profound appreciation and gratitude, as he also noticed with fondness the gracious thought to have inserted in the program the ouverture of “Lenore” by Ludwig van Beethoven, since that is known to be  one of the his favorite classical pieces.

The Holy Father then bestowed upon the Apostolic Nuncio His Blessing, asking to, please, bring it to the people of the beloved Ukraine.