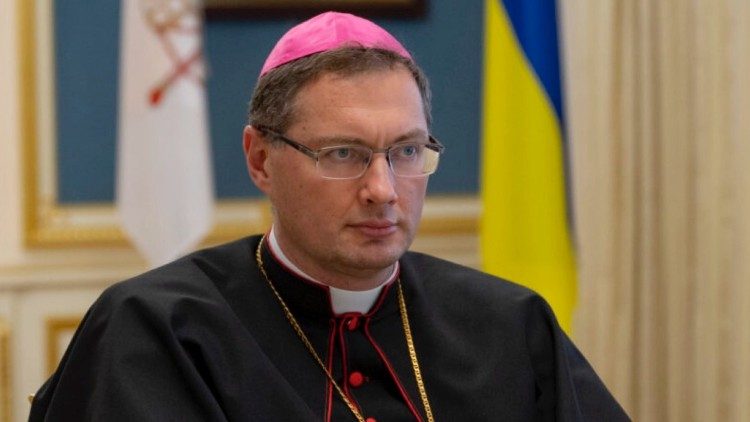 Archbishop Visvaldas Kulbokas is in the nunciature in the Ukrainian capital of Kyiv where he shares the fate of the millions of civilians seeking shelter from the battles in the city: “I wonder how people will manage in a few days with the sick and with food, how will the children who have suffered this violence react? As a Christian I try to help everyone to believe in brotherhood and respect for others.”

The images of Kyiv are stark: a building gutted by a Russian missile, an ambulance stopped between a belt of armored vehicles and a blockade of horses, highways where only tanks are passing by and shooting at each other. The madness of Kyiv, where just four days ago the traffic was normally busy and people were dining out, today we see a stream of shocking images from the war front opened by Russia in Ukraine symbolizing the terrible reality an entire nation has been living through since Thursday. In the grip of the fighting civilians are trying to escape to underground areas of the city or by foot to the borders.

A direct witness to what is happening in Kyiv is the apostolic nuncio, Archbishop Visvaldas Kulbokas, whose fate, and that of his collaborators, is linked together with that being experienced by millions of the nation’s citizens. Archbishop Kulbokas recounts to Vatican News what he has seen in this interview.

Your Excellency, we are witnessing with great concern and sorrow what is happening in Ukraine. You are in Kyiv where fighting is taking place: tell us about the situation you are experiencing?

This is my biggest concern: the city of Kyiv, where I am and I allow myself to speak, is a big city, with about three million people, and now in these days is completely paralyzed by the war violence. In addition to the incoming missiles forcing people to hide as they can in basements, in subway stations, the question I ask is how are the sick doing? Those ill with any kind of disease, because it’s hard to move, it’s hard to get around, to find care… how are they managing?

Reports from the country show the image of a ghost town, where, in addition to health care, it is now difficult to get food and water…

Yes, knowing that difficult days were approaching, everyone tried to stockpile some food, but these will last for a few days and so the question is: what will happen if this situation continues for several days? What will be left to eat? Because there is no way to stock up now, and it is risky to stay in apartments, in rooms, it is difficult to stay in public areas… Even we, in the nunciature, we try to stay on the lower floors where there is less risk of being hit. And so it’s even more difficult to go outside and find stores open, but it doesn’t seem to me that they’re open or able to stock up, because even the roads are cut off… What’s going to happen in a few days is a very big question.

We see photos and videos of people who have taken refuge in basements, in subway tunnels, especially many women and children, who certainly do not understand what has suddenly disrupted their lives…

This is another big question. We, the adults, how do we help the children? Because maybe an adult goes through suffering, but a child… I had already met people in Italy and other European countries who grew up during the Second World War: how much suffering they are still going through today… I was thinking this morning about the children of Kyiv: when they grow up, what kind of attitude will they have towards others, having lived the first days, the first months, the first years of their lives under gunfire and missiles? This is another great question….

How are all of you doing at the nunciature?

In the nunciature we know that we are in a residential neighborhood and therefore not immediately exposed as on the main roads of the city. However, you hear the missiles going by, you hear the explosions – even last night – the battles nearby… We, the nunciature staff, are also in the lower floors ready to take refuge in the basement if we see an immediate need. But we pray: we pray for ourselves, for others, we pray for peace, we pray for the conversion of all.

What appeal would you make?

More than an appeal, I pose the question before God: what is the eternal God saying to me with this situation? What should I do with myself? And as a Christian, I understand that nothing happens that is hidden from the Lord Jesus and that even in such a heavy situation my vocation is to seek my own conversion but also to try to help others. “Others” means “all”: to convert and to make sure that not only peace is found, but brotherhood, respect for one another.

The Church is praying for peace in Ukraine and will do so in a special way on March 2, as Pope Francis has asked everyone to do. A moment at which you will be strongly united….