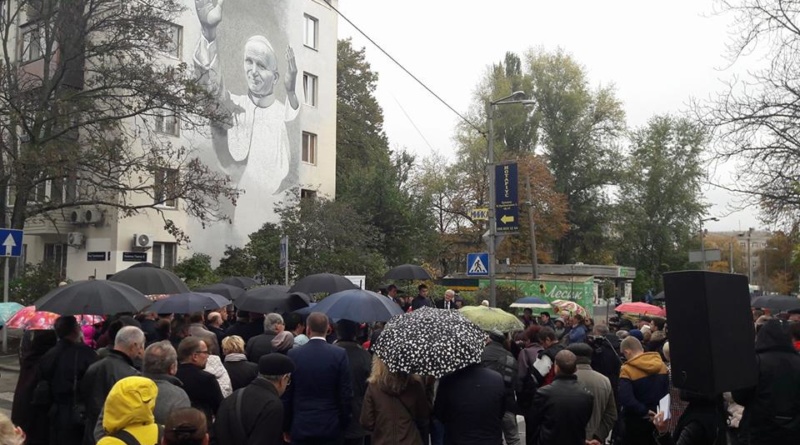 On the occasion of a street in Kyiv named after Saint John Paul II, the Holy Father Francis conveys His personal greetings and wishes to manifest his sentiments of appreciation for the laudable initiative, while expressing His desire that the luminous examples and teachings of the unforgettable Pontiff may be of encouragement in continuing with joy the journey of Christian witnessing and service of neighbor, Pope Francis wholeheartedly imparts to Your Beatitude, Your Excellency, the priests, the Authorities and those present at such a meaningful event His Apostolic Blessing.

Cardinal Pietro Parolin
Secretary of State of His Holiness

To the words of the Holy Father I would like to add expressions of satisfaction and congratulations on the part of the Apostolic Nunciature in Ukraine for this important event.

John Paul II was the first Slavic Pope and as such he played a deciding role not only for the life of the Church , but also for world’s history and in particular for Europe, in the historic circumstances that characterized his pontificate. One such instance is his visit to Ukraine. It was the firm intention of the Holy Father to begin, and then strengthen, the process of détente and brotherhood between his country of origin, Poland, and Ukraine, which had been divided in the past, through historic, often dramatic, events.

His journey had furthermore the intention to show to the world the respect that the Pope of Rome had for the oriental Christian traditions, as well as expressing his full availability for a moral and civil reconstruction and the beginning of an always increasing progress in the countries that had been for so many years victims of the atheistic ideology.

The fact that today a street is named after him in the Capital City of Ukraine, this glorious City of Kiev, signifies the intention to recognize symbolically a permanent expression of friendship and the remembrance of a man who loved and promoted liberty and peace. This is a further occasion to reaffirm the commitment of the Catholic Church for the prosperity of Ukraine in its various forms and at every level. United in sentiments of common devotion to the man, the Catholic Church expresses its commitment to make sure that the prophetic message Saint John Paul II may continue to powerfully resonate and may be concretely applied even in the difficult moments that this Country is presently going through. It is indeed in God that our hope is founded and God does not disappoint, even beyond difficulties that at times might seem to be insurmountable.

May the intercession and the example of Saint John Paul II be a powerful contribution to assure a Ukraine united, concord, respectful of  diversities, honestly concentrated in the promotion of the common good.

With these sentiments we intend to express gratitude and wishes for this laudable initiative.